Dambulla Cave Temple is a UNESCO World Heritage Site. The Dambulla Rock Temple had first been constructed during the rein of King Vattagamini Abhaya ( 103 BC and 89-77 BC ). The Sinhalese often call him as King Valagamba. During a South Indian invasion the king had to abandon his Anuradhapura Kingdom . For 12 years, King Valagamba was in hiding and had frequented these caves for his safety. After regaining the kingdom of Anuradhapura and becoming the King, to show his gratefulness for his safe place, he converted those caves into Buddhist Temples by constructing walled partitions under the rock overhang which spans the entire area as a single large cave.

It is home to the Worlds most acclaimed Cave complex of magnificent Buddha Images and Rock Paintings of vivid colours and shapes constructed and painted from around 2nd Century BC (Anuradhapura era ) and continued up to the Kandyan era of the 18th Century. one of the largest and most outstanding Buddhist complexes in the Southern and South Eastern Asian region. 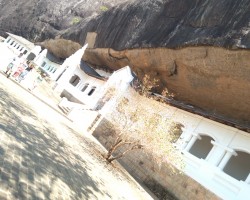 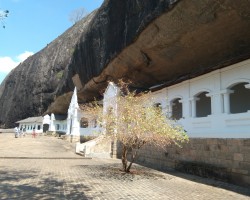